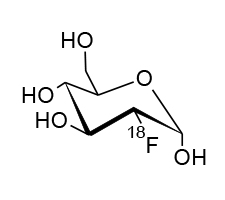 2-deoxy-2-[18F]fluoro-D-glucose (FDG) is a radiolabeled imaging agent that has been approved by the FDA for the following three indications:

There is also a long history of using FDG in studies assessing malignancy, epilepsy, dementia, inflammation/infection imaging, and many other diseases. There are thousands of studies that have been published using this most commonly used PET imaging agent.

FDG is transported from blood to tissues in a manner similar to glucose and competes with glucose for hexokinase phosphorylation to FDG-6-phosphate. Since FDG-6-phosphate is not a substrate for subsequent glucose metabolic pathways and has a very low membrane permeability, the FDG-6-phosphate becomes trapped in tissue in proportion to the rate of glycolysis or glucose utilization of that tissue [Reivich 1979, Yonekura 1982, Schelbert 1982, Doyle 1987, Joensu 1987, Berry 1991, Bonow 1991, Maisey 1991, Hawkins 1991, Schwaiger 1991].

Sodium Fluoride F 18 Injection is a radioactive diagnostic agent for positron emission tomography (PET) indicated for imaging of bone to define areas of altered osteogenic activity. The agent is a highly sensitive bone-seeking PET tracer used for detection of skeletal abnormalities (NIH 2008). The uptake mechanism of [18F]-Sodium Fluoride resembles that of [99mTc]-MDP with better pharmacokinetic characteristics including faster blood clearance and two-fold higher uptake in bone. Uptake of [18F]-Sodium Fluoride reflects blood flow and bone remodeling. The use of novel hybrid PET/CT systems, has significantly improved the specificity of [18F]-Sodium Fluoride imaging as the CT component of the study allows morphologic characterization of the functional lesion and more accurate differentiation between benign lesions and metastases. 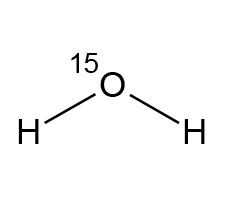 The mechanism of action of H215O is based on the distribution and clearance of water from the tissues [Huang 1983]. H215O is an inert tracer [Stocklin 1993, Huang 1983]. It is freely diffusible (approximately 95% extraction fraction in primates under normal blood flow conditions) across the blood-brain barrier; thus, the delivered tracer can diffuse quickly into the extravascular space [Huang 1983]. Due to the small size of the water molecule, the distribution of H215O in the brain reflects the tissue perfusion at the capillary level. Since H215O is not chemically trapped in tissue, it will be cleared gradually from the tissue by blood flow; the larger the blood flow, the faster the clearance occurs [Huang 1983].The rate of clearance can be directly correlated to perfusion of the tissue of interest. 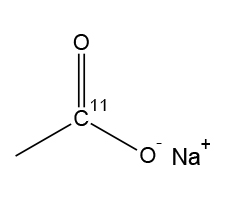 [11C]-Acetate is a radiolabeled imaging agent that has been used for investigating tumor lipid membrane synthesis and myocardial metabolism. [11C]-Acetate is a metabolic substrate of beta-oxidation and a precursor of amino acids, fatty acids, and sterol. In vitro studies suggest that high tumor-to-normal ratios of [11C]-Acetate are mainly due to enhanced lipid synthesis reflecting the growth activity of neoplasms [Yoshimoto 2001]. [11C]-Acetate PET has received significant interest for detecting and staging prostate cancer and other malignancies. Initial studies also show promise in characterizing tumors of the brain, lung (NSCLC), liver, lymphoma, nasopharyngeal carcinoma, ovarian cancer, and colon cancer. [11C]-Acetate generally experiences rapid and high uptake, with rapid washout from normal tissues but slower washout (or retention) in malignant tumors [Kato 2002, Yeh 1999, Higashi 2004]. 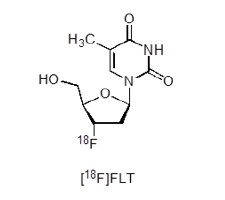 3'-deoxy-3'-[18F]-Fluorothymidine (FLT) is a structural analog of the DNA constituent, thymidine. It is a radiolabeled imaging agent that has been proposed for investigating cellular proliferation with positron emission tomography (PET).

Although FLT is not incorporated into DNA, it is trapped in the cell, due to phosphorylation by thymidine kinase, a part of the proliferation pathway. As such it has the potential to image proliferating tumor cells in proportion to the DNA synthesis rate. Therefore 3'-deoxy-3'-[F-18]fluorothymidine [F-18] FLT is a PET agent that can be used to image proliferation in malignant cells and monitor response to therapies known to effect proliferation [Shields 1998, Vesselle 2002]. 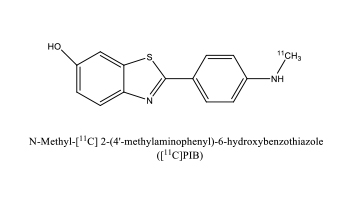 [C11]-PIB otherwise known as (N-methyl-[11C])6-OH-BTA-1 is a thioflavin-T derivative that binds to amyloid-beta (Aβ) peptide fibrils associated with Alzheimer’s disease. This compound is one of the early stage imaging agents utilized to measure amyloid load in humans. Amyloid plaques are believed to play an integral role in Alzheimer’s disease and therefore could be used to correlate cognitive decline [Klunk 2003, Klunk 2004]. 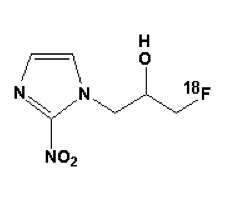 1H-1-(3-[18F]-fluoro-2-hydroxy-propyl)-2-nitro-imidazole or [18F]-FMISO is a radiolabeled imaging agent that has been used for investigating tumor hypoxia with positron emission tomography (PET) [Graham 1997, Silverman 1998, Rofstad 1999]. [18F]FMISO is an azomycin-based hypoxic cell sensitizer that has a nearly ideal partition coefficient and, when reduced by hypoxia, binds covalently to cellular molecules at rates that are inversely proportional to intracellular oxygen concentration, rather than by any downstream biochemical interactions. 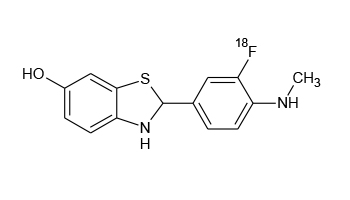 [18F]-Flutemetamol or 18F-39-F-6-OH-BTA1 is a fluorine-18 labelled PET diagnostic agent for measuring Aβ plaques and behave very similar to 11C-PIB but has the advantage of the 120-minute half-life of [18F] compared to 20 minutes for [11C] [Koole 2009, Nelissen 2009]. It is derived from the basic structure of the dye thioflavin-T and can be used as an aid in diagnosis of Alzheimer’s disease.

[18F] Fluciclovine is a synthetic L-leucine analogue that is actively transported into mammalian cells by amino acid transporters (AAT). The radiopharmaceutical is unique as it is not incorporated into newly synthesized proteins. Following injection, [18F] Fluciclovine is preferentially taken up into cells with enhanced amino acid transport, such as tumor cells that require increased amounts of amino acids to support increased metabolism and proliferation.