U of U Health-produced Film, One in a Million, Earns National Recognition 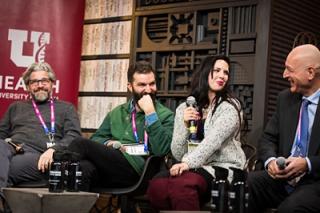 One in a Million, a short documentary produced by University of Utah Health in collaboration with independent filmmakers Ross Kauffman and Jeremiah Zagar has earned national recognition since its release in February, 2019. It has been an official selection at eight film festivals nationwide and has received 12 marketing awards.

The film tells the story of Tyler, who, by the time he turned 10, lost his ability to walk, hear, and see, but the cause remained a mystery. His family eventually turned to the Penelope Program at University of Utah Health, where scientists searched Tyler’s DNA for clues to his condition. What they discovered led to a life-changing treatment. The documentary featuring his journey premiered at a U of U Health-sponsored event at the 2019 Sundance Film Festival.

Since then, the film has toured the country in film festivals and was a touchpoint in the campaign for Utah legislation to support the needs of the undiagnosed disease community. The bill passed, expanding insurance coverage for exome sequencing, a diagnostic test that can help find answers for people like Tyler.