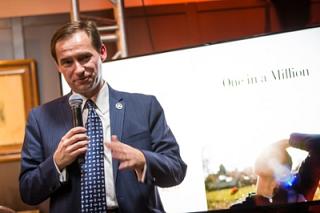 In March, a bill informally called “Marley and Tyler’s Bill” passed the Utah legislature to expand insurance coverage for testing needed to diagnose children with undiagnosed diseases. The bill was named after Representative Steve Eliason’s daughter, Marley, and Tyler Teuscher. After years of searching for answers, the Penelope Program at University of Utah Health found diagnoses for these children within weeks after they were admitted to the program.

Advances in technology and expert organizations like the Penelope Program are making diagnostic odysseys a thing of the past for some patients. But accessing this specialized care remains out of reach for many because it is seldom covered by insurance. This happens despite the fact that doing so could mean the difference between despair and hope —and save on health care costs in the long run.

Steve Eliason, a member of the Utah House of Representatives, had never given the issue a thought until his own daughter Marley was born with a mysterious condition that caused cognitive delay and other health issues. At age nine, her diagnosis by the Penelope Program led to improvements in her quality of life. While the program assists their patients, it can’t do the same for Utah’s hundreds of undiagnosed disease families.

Having experienced the relief and benefits that can come with having an answer, Eliason grew frustrated that lack of insurance coverage prevented other families from the same. So, he did what he does best and sponsored a bill. He named it after his daughter and Tyler, the boy featured in the U of U Health-produced film, One in a Million. The legislation expands insurance coverage for DNA (exome) sequencing Utah children with undiagnosed diseases.

“Hopefully this legislation will give many more families hope as they have an opportunity to open the book of life,” Eliason said while announcing the bill at the film’s premiere at a U of U Health sponsored event held at the 2019 Sundance Film Festival last February.

Less than two months later, August testified in favor of the bill and legislators watched One in a Million. After, the bill passed —creating a gift of hope for many.