View the science art gallery and meet the scientists on Nov. 3 from 5-7pm at the Clark Planetarium in Salt Lake City. 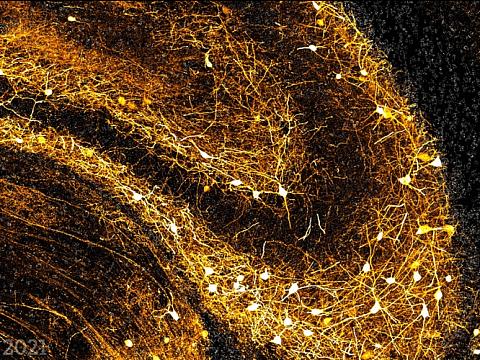 Imagine stumbling upon an art gallery. At first glance, you see images of nature. You find a string of constellations, a multi-colored seashell, and a collage of four blooming mushrooms among the art on display. But these pictures are more than they appear. In fact, these are all microscopic images showing the intricate details of tiny, almost undetectable parts of our everyday lives—a brain making memories, a developing inner ear, and a mutating bacterium. These breathtaking images were all created by scientists at University of Utah Health .

Art is a powerful tool to convey messages and connect with people. It can be an entryway to communicate science, opening doors for meaningful scientific conversations. Connecting science and art has been one of the goals of the Immunology, Inflammation, and Infectious Disease (3i) Initiative’s Science Art Contest.

The University of Utah 3i Initiative is a campus-wide community of researchers making fundamental discoveries in related scientific fields. Since its inception in 2017, the initiative has held a yearly research symposium highlighting innovative research at the U. For the past two years, the meeting has also featured the creative talents of faculty and trainees, adding a science art contest to the agenda.

The art contest has brought in dozens of entries from faculty and trainees in two categories: Science as Art, encompassing scientific data that has been reimagined as art, and Art of Science, comprising original science-related artwork. The entries were displayed at the annual symposium, and attendees voted for their favorite artwork on the day of the event. In addition, local and national scientists and artists judged the entries, selecting the top three art pieces in each category. 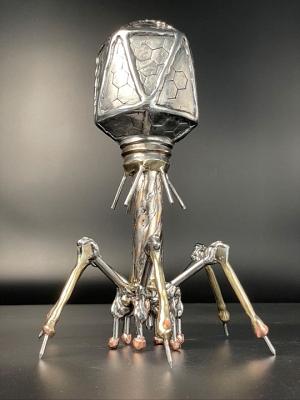 “The creativity here is just amazing,” said Bryan Welm, PhD, an associate professor of oncological sciences. At the art contest, Welm showed off his metal working skills with a larger-than-life bacteriophage, a virus that infects bacteria. His was one of many 3D art pieces that made a splash in the Art of Science category in the contest’s inaugural year. Next to Welm’s metal virus stood a clay model colon, a cellular pillow, a 3D-printed brain, and an eyeball cake.

This year’s contest featured several alluring microscopic images in the Science of Art category. An electric green neuron competed against brightly colored cells in a liver, while a green and red radiating bacterium battled for a top spot against elaborate pole-shaped muscle fibers. These captivating images showed off the excellent scientific discoveries and the artistic abilities of scientists at the U.

One goal of the art contest is to push scientists to engage in science communication. “We communicate to our scientific colleagues, but we’re not formally educated in presenting our data to the general public, and they really deserve to know what we’re doing,” Welm said.

The way he sees it, emotional connection is the key to getting a more general audience interested and involved. “We’re showing an artistic view of what scientists do and then connecting the art with the artist, and perhaps even with the science. And that opens up conversations with the public.” Efforts such as this science art contest capture the curiosity of even the most science-averse viewer while tapping into the creative nature of science. 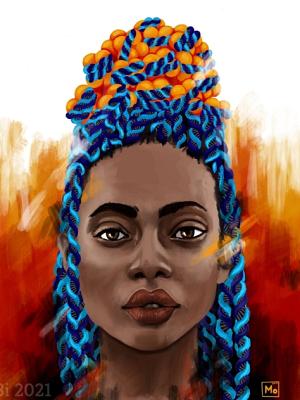 Take Megan Okada’s artwork, for example. Okada, a recent graduate from the Department of Biochemistry’s PhD program, won the 2021 contest with her artwork entitled “Braided Helix.” This powerful and imaginative portrait features a woman with double-stranded DNA braids adorning her head. The woman has a certain gravity in her gaze, drawing in onlookers to admire the blue DNA strands that frame her face. This captivating image has been a starting point for curious audiences to learn more about DNA, the stuff that makes us who we are.

In addition to helping scientists engage with the public, the art contest has helped researchers connect with one another. Fellow scientists at the U have commissioned Okada to create original art for various labs and departments after seeing her work. What’s more, new and experienced scientists alike have enthusiastically participated in the contest, using the opportunity to show off their talent and build connections with peers. “It helps expand everyone’s horizons,” Okada said.

Scientists across campus are making efforts to reach new audiences and build trust in the scientific process, and the 3i Art Contest is a good example of making those connections in a creative, engaging way.

The winning artists will put that theory to the test when their art goes on display on November 3 from 5-7pm at the Clark Planetarium in downtown Salt Lake City as part of The Gateway Art Stroll.

Next year, the 3i Art Contest aims to include community submissions to elevate public engagement.

Morgan Nelson is a PhD candidate in the Department of Pathology and intern with University of Utah Health Marketing and Communications.

Top photo - “Constellations; Stellar Memories” by Arnulfo “Tuna” Tuñon-Ortiz. A cross-section of a hippocampus, the brain region responsible for learning and memory.

Bottom photo - "Braided Helix" by Megan Okada. DNA is the genetic code which makes us who we are. This imaginative image depicts DNA as the braids adorning this woman’s head.