High-impact discoveries at University of Utah Health are transforming how we think about diabetes, its cause and solutions. These advances could hardly come at a better time. The disease is a big problem in the U.S., leading to an estimated $327 billion in health care costs. What’s more, while 1 in 10 American adults have diabetes, 1 in 3 have prediabetes, a sign that they are well on their way to developing the disease.

An impediment to solving the diabetes conundrum is the complexity of the disease. Although people with both Type 1 and Type 2 diabetes have difficulty controlling their blood sugar—leading to serious health complications if left untreated—the causes of the two are distinctly different, as are many of the downstream effects. New research is unraveling these complexities, revealing previously unrecognized opportunities for intervention. Combining these insights with a lot of work and a little luck could one day make diabetes a problem of the past. 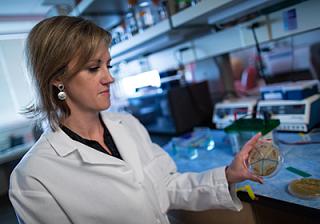 Disruptions in microbiota—bacteria that live in the gut—can lead to obesity. Photo credit: Charlie Ehlert.

Yes, poor lifestyle choices can cause obesity but in a paradigm-shifting discovery, a research team led by June Round, PhD, shows that abnormalities in the body’s immune system may lead to weight gain as well. No matter the cause, obesity is an issue, increasing the risk for diabetes and other metabolic disorders such as cardiovascular disease. At the center of the surprising immunity-obesity connection are bacteria that live in the gut. Just as our immune system protects us from harmful bacteria, it also prunes the gut’s naturally occurring bacterial community. Research with mice showed that when the balance of gut bacterial species is off, the body absorbs more fat, leading to excessive weight gain. Even more surprising, resetting the balance triggered weight loss. The finding could explain why some people with immune disorders are prone to obesity and could lead to novel approaches for treating weight gain and diabetes. 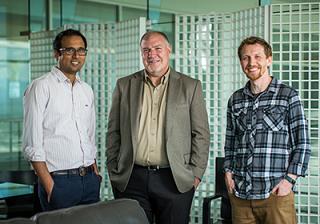 For decades, cholesterol has been the best-known harbinger of bad metabolic health. Now, a body of research from the Department of Nutrition & Integrative Physiology at the College of Health is transforming that long-held perception. “We think ceramides are the new cholesterol,” says department chair and lead researcher Scott Summers, PhD. Their work is showing that people with high levels of a type of fat, called ceramides, are more likely to have type 2 diabetes and are four times more likely to have heart disease and stroke. Importantly, work with animals showed that blocking ceramide build-up could prevent diabetes and improve overall metabolic health. One of the most encouraging aspects of that discovery is that the trick used to lower ceramides in mice is very simple and “druggable”. Summers and his team are already testing whether existing drugs, already known to be safe in humans, also triggers the effect. That finding could hasten testing of a novel diabetes treatment in humans. 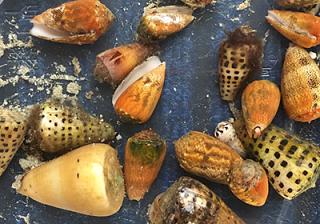 A hybrid marine snail-human insulin could become a new, better treatment for diabetes.

An Improved Insulin, Inspired by the Sea

People with diabetes self-inject insulin to control their disease. Though various insulin therapies are readily available, they are far from perfect. Development of a faster-acting insulin would diminish the risk of hyperglycemia and other serious complications of diabetes. In 2020, U of U Health scientists developed the world’s smallest, fully functional version of the hormone. It combines the potency of human insulin with the fast-acting potential of a venom insulin produced by predatory marine snails. In the wild, the fish-hunting species release plumes of the insulin-containing-venom into the water, paralyzing its prey by causing blood sugar levels to plummet. An interdisciplinary team of U biologists, biochemists, pathologists and internal medicine investigators isolated insulin from the venom, fused it with essential components of the human hormone, and demonstrated its effectiveness in animal models. The finding could jumpstart development of novel insulin treatments capable of improving the lives of those with diabetes. 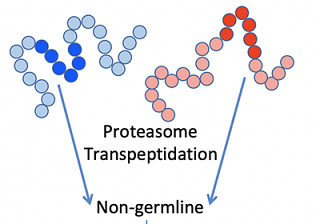 Medicine can’t truly fix a problem without knowing the underlying cause. Historically, that has been a roadblock to developing better treatments for Type 1 diabetes. This form of the disease occurs when the immune system attacks pancreatic beta islet cells, stopping them from producing insulin to regulate blood sugar. Research labs in the Division of Microbiology and Immunology, Department of Pathology, have reached a new understanding of Type 1 diabetes by finding that the disease stems from naturally occurring modifications to the insulin gene, including ones that abnormally fuse with other proteins. The immune system attacks these rogue versions of insulin, destroying the cells that create them in the process. Their research understanding the road from rogue gene to destruction is opening up opportunities for novel interventions.