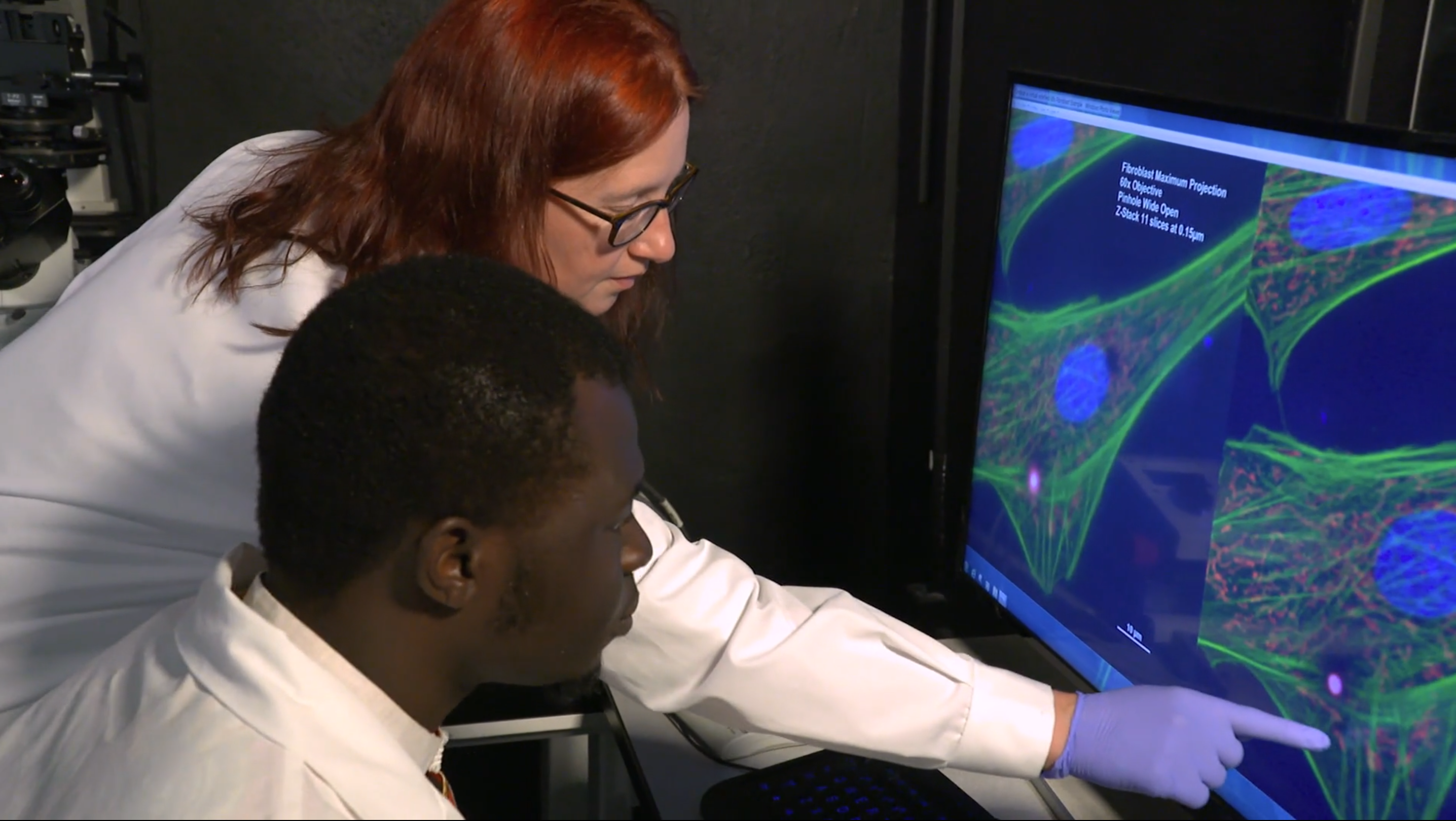 A global exchange program between U of U Health and University Yaounde I in Cameroon benefits science and scientists on both sides of the world.

Before COVID-19, much of the world has struggled with another pervasive infectious disease: malaria. Although incidence rates of malaria have seen a great decline since 2000, it remains a health concern in many countries. Around 500,000 people, mostly children under the age of 5, die from the disease each year, with 90% of cases occurring in Sub-Saharan Africa. Alongside the lives lost, the cost of malaria control in these regions drains economies and hampers development.

Looking for a Solution

Developing more effective and affordable therapies that target the disease-causing parasite Plasmodium can help save the most vulnerable. Tracey Lamb, PhD, an associate professor in the Department of Pathology at University of Utah Health, is at the forefront of the fight against malaria. Lamb, a self-proclaimed parasite nerd, has been fascinated by the biology of parasites since high school. She went on to get an undergraduate degree in parasitology and later a PhD in parasite immunology at Edinburgh University in Scotland.

Lamb never imagined that, one day, her entire life’s work would be dedicated to fighting malaria. Her lab uses mouse models of Plasmodium infection to explore the mechanisms behind the disease. In countries where malaria is endemic, some people can appear healthy despite being infected with Plasmodium.

However, this is not the case for all and Lamb’s work looks at how Plasmodium causes different manifestations behind malaria, including cerebral malaria — a type of malaria that causes neurological complications through swelling of the brain. Lamb also studies how people generate antibodies to fight off the parasite.

How Does Malaria Affect the Lives of Those Who Face It Every Day?

Lamb works in collaboration with the Centre Pasteur du Cameroun (CPC). The national public health and research center is located in Yaoundeé Cameroon, a Central African country plagued by malaria. After exploring different options, Lamb’s post-doc at the time, Patrice Mimche, put her in touch with Lawrence Ayong, PhD, the director of the malarial research unit at CPC.

In 2015, Lamb travelled to Cameroon to meet with Ayong. He had been trained and educated in the U.S. and was able to bridge the gap from both sides. Together, they have successfully obtained funding for joint research from the National Institutes of Health; now, they are working on several projects looking at different aspects of malaria in humans.

With every visit to Cameroon, Lamb solidified partnerships and laid the groundwork for what was, and is, to come. “Through the collaboration, I realized we have a duty to be doing more than just research on malaria,” Lamb says. “Rather, we should also be educating and training students and postdocs in those countries. They are the people who should be at the forefront of this research, but really they lack the economic capacity to excel in this respect.”

Now, Lamb holds adjunct positions at the Centre Pasteur du Cameroon and the University of Yaoundé I, where her passion for teaching has led her to set up an annual immunology graduate course.

“I’ve developed relationships and established roots in Cameroon,” Lamb says. “Ayong is no longer just my collaborator, he’s my friend. The more that we do together, the more that we accomplish — the collaboration is now starting to bear fruit.”

As a graduate student in Lamb’s lab, Thayer Darling saw a patient with malaria for the first time when she travelled to Cameroon in 2018. The trip opened her eyes to the severity of the problem. While there, Darling helped analyze samples from 175 children between the ages of six months and 17 years who were admitted to the hospital with neurological complications of malaria. Many of the children didn’t survive because of their families’ lack of access to resources and inability to afford treatment. “You even had to pay for the blood transfusion, which many just can’t afford,” Darling says.

Having limited access to reagents, equipment, and lab supplies in Cameroon, the team prepared ahead of time by shipping items that were needed to analyze the samples they collected. However, they still had to adapt to slightly different, and less wasteful, protocols to obtain valid experimental results with the reagents available.

The students in Cameroon were passionate and eager to learn from Lamb’s team. “They were such critical thinkers, they knew what questions to ask and the possible solutions to those questions,” Darling says.

“As a PhD student, you focus on micro-projects, down to particular proteins mediating disease,” Darling says. “It’s easy to forget the bigger picture. A partnership like this is beneficial to keep projects in context.” Having focused until that point on a career in laboratory research, Darling had a change of heart after returning to Utah. She now wants to pursue a career in clinical trials and do work with more immediate impacts on patients’ lives.

Focusing on the Details

Franklin Mvo Maloba, one of Ayong and Lamb's co-mentored trainees in Cameroon, came to Utah to undertake doctoral research on malaria. His interest in malarial research began in childhood when he tragically lost his cousin to the disease. Living in Northern Cameroon, Maloba saw countless cases of people with malaria. “You see children dying in front of you and wonder what you can do to help,” Maloba says. “That’s when I decided to become a scientist to make a difference.”

In his hometown, the means to pursue a career in science were lacking. So, he undertook his bachelors at University of Yaounde I and subsequently worked in Ayong’s lab on asymptomatic malaria developing skills in the diagnosis of malaria and management of patients with this disease.

Coming to the U.S. in the spring of 2019 was both an interesting and frightening experience for Maloba. Leaving his country for the first time on a plane, doubts began to flood his thoughts. “Will I meet up with the expectations? Will the people there welcome me?” Maloba asked himself.

The first few weeks were hard. “Everything was so different in Utah. People had a hard time understanding my accent. I didn’t want to bother anyone.” The classes were starkly different than in Cameroon. The faculty members were paced too fast, taught on PowerPoint instead of chalkboards, and assigned students labwork and coursework simultaneously. Maloba felt overwhelmed, as though there was a target to meet and he just couldn’t hit it. Now, things are improving and he has caught up, operating under this different pace.

Studying in the U.S. is already helping Maloba think out of the box and develop better hypotheses in his scientific research. “I feel like my dreams are now materializing. This experience makes me want to be a part of something bigger in terms of disease eradication,” he says. “If students in Cameroon had the opportunity to come here… this would greatly shape their way of thinking.”

After Maloba finishes his five-year pre-doctoral research program, he hopes to return to Cameroon with a better skillset in both the areas of teaching and research.

Lamb’s collaborator, Ayong, fully understands Maloba's perspective—he experienced this himself when he undertook doctoral research as a Fulbright Scholar in the U.S. “When education systems that are completely different come together with different perceptions and expertise, it leads to innovation,” Ayong says. “That is the beauty of research when we work across borders.”

The vision for the future is a joint center for U of U Health and the University of Yaoundé I that will focus on in-depth immunology training and elevate Cameroonian trainees to become internationally competitive in research.

“It’s not just the research,” Ayong says. “The purpose is to expand the education, and we have a duty to do that.”

“It’s not just the research. The purpose is to expand the education, and we have a duty to do that.”