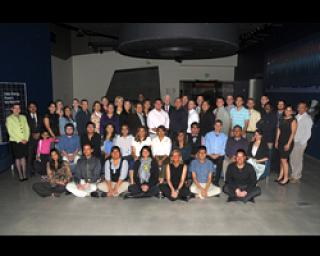 The Natural History Museum of Utah became the site of a veritable gathering of Nations in late May as selectees of the University of Utah’s Native American Summer Research Internship (NARI) convened to kick off a new summer session. This year’s 20 interns represent 9 Native American tribes from 14 colleges and universities and come with a varying pedigree of 13 undergraduate study majors.

They have come to the University of Utah for a 10-week paid internship in which they will help world-class researchers conduct health sciences studies aimed at tackling some of the tough problems in modern health care.

Steven Just, a chemistry senior from the University of Minnesota and part of the Sisseton-Wahpeton Oyate tribe, is working with the U’s Don McClain, MD, on a project studying iron as a risk factor for diabetes and how it controls metabolism. “Reading about the University of Utah and the prestige of the university as a research institution nationally and internationally, [NARI] just seemed like a great opportunity for my undergraduate career,” said Just.

Just is graduating this year and plans to apply to several medical schools, including the U. He hopes his experience with NARI will boost his chances of getting into a program. Just says the best thing about NARI has been “conducting research and being able to learn and investigate things on my own while being mentored by Dr. McClain and graduate students in the lab.”

For his part, McClain has seen Just blossom in the program. “I just saw his confidence grow, not to mention his knowledge base,” McClain said.” The joy remains watching younger people come up and catch fire and learn from their research.”

About 30 hours of each week are devoted to research-related activities for the interns. Another 10 hours are spent in academic and professional development. Part of that development comes from working with other Native American and indigenous faculty and graduate students who serve as cultural mentors.

Crystal Tulley-Cordova is working on a PhD in geology and serves as one of those mentors. She describes her role as helping provide a bridge to post-graduate education for fellow Native Americans.

“Native Americans are low in population when going into grad school or medical school,” says Tulley-Cordova. “What a cultural mentor does is provide encouragement. I provide that encouragement and become [the interns’] friend. They know that I have the same cultural values as they do as Native Americans. My role is to provide support and encouragement for the students.”

The research and cultural mentorship aspects of the NARI program seem to have tremendous impact on the participating interns. One of them, a second year NARI participant and member of the Muscogee tribe, Sam Hawkins, worked last summer with Joshua Schiffman, MD. They studied cancer genomics, and Hawkins was able to present the research at five different conferences.

“I’ve had a lot of good experiences where I’ve seen the positive role of mentoring from Dr. Schiffman, Richard [White, NARI Program Coordinator], and Ed Napia, my cultural mentor,” says Hawkins. “So during my senior year in college I started a mentoring program at Utah State to help out freshmen and sophomore students with getting internships and working with professionals. I have had a lot of positive experiences.”

Schiffman is impressed with Hawkins’s development as an intern and on the positive ripple effects it has created. “These are skills that I didn’t get until I was already out of medical school, doing my residency and internships,” he says. “So I feel like we’ve given Sam and his colleagues a head start here by giving them the tools they will need to be successful.”

Carrie Byington, MD, is the Vice Dean for Academic Affairs and Faculty Development at the University of Utah School of Medicine. She is also the Principal Investigator in the NARI program. At the 2013 welcome dinner, she encouraged the students to find their voices.

Byington said, “We want you to speak up. We want you to ask questions. We want to you share your ideas and perspectives because they will be different and unique. You will have opportunities to learn from faculty members, but don’t forget that we are also learning from you. So share with us your wisdom and insights because all of these will be important as we tackle the problems in medicine and science.”

As she closed her remarks, Byington spoke to the deeper purpose of NARI. “As future leaders, your tribes and communities will look to you for solutions to many of the serious health problems and challenges that face Native Americans today,” she said. "The causes are complex, and the factors are multiple, including genetics, the environment, access to care, and cultural differences. It will be up to you to apply what you learn during your training to your communities. You will have a unique role to play to connect two cultures that can learn and benefit from each other.”