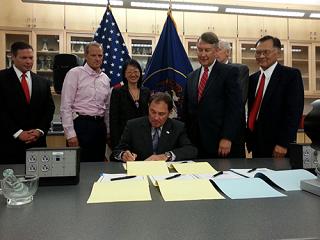 During the signing ceremony, which took place in a classroom laboratory, Herbert told the crowd that an important role of government is to improve the lives of people, and that the bill would do that by ensuring Utahns would have better access to health care by increasing the number of providers.

Currently, Utah ranks fourth from the bottom in the number of primary care physicians per capita, while it also ranks among the fastest growing states in the nation. To meet the growing health care shortage, the law will increase the medical school class by 20 students—from 82 to 102—beginning in the fall of. An additional 20 students will be added to the incoming class of 2015 for a total of 122 students annually. These students are expected to have a strong Utah connection, which means many are likely to stay in Utah to practice medicine. Additionally, the admissions process and curriculum encourages students to go into primary care.

The governor signed the law in front of a crowd of faculty, students, and lawmakers. “All of us at the University are committed to training the best and the brightest future medical providers our state as to offer; for the good of our population, for the good of our communities, and for the good of our world,” said Vivian Lee, MD, PhD, MBA, dean of the medical school and senior vice president for health sciences. Lee also expressed gratitude to the governor, the Utah legislature and Sen. John Valentine (R) - District 14, who sponsored the bill, for their support.

The governor also signed Concurrent Resolution 12, which recognizes and supports the efforts of University of Utah’s Huntsman Cancer Institute in confronting and curing cancer, and House Bill 81, which directs the creation of a public education program around cytomegalovirus. Rep. Rhonda Menlove (R) District 1, spoke about HB81 with many of her family members also in attendance. She has a grandchild who suffers from the condition, which can cause hearing, vision, neurological and developmental problems.