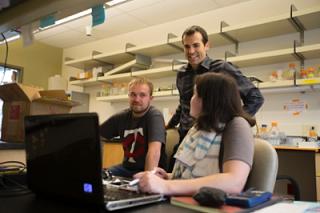 Adam Frost remembers the pivotal moment when he realized science research was what he wanted to do with his life.

Enrolled in medical school at Yale University, Frost reveled in learning about human biology and the biology of human diseases. But one stark reality pushed him down a different career path.

“I didn’t love practicing medicine,” Frost recalls. As part of a combined MD/PhD degree program at Yale, Frost soon found his calling: Biomedical research. Time spent at Yale connected him with mentors Pietro De Camilli – a cell biologist discovering important factors in how cellular membranes reshape themselves – and Vinzenz Unger – a structural biologist and membrane protein biochemist. Both mentors spurred an interest in Frost to combine two areas of investigation to discover how a family of proteins binds to and shapes cellular membranes during endocytosis — the process in which substances gain entry into cells.

He published a series of papers with his mentors in 2008 and 2009 reporting on the functions and structures of the BAR domain superfamily of membrane-molding proteins, part of the many steps he’s taken along the way to today becoming known as a standout researcher at the University of Utah.

Frost arrived in Utah about two years ago, following a post-doctoral fellowship where he focused on learning cutting-edge genomic and genetic technologies at the University of California, San Francisco. As a Ute, he has quickly established himself as a young faculty member with an eye for innovation and collaboration. Earlier this year he was awarded one of 15 Searle Scholar positions and this month he earned another distinction that sets him apart from other researchers: Frost was named one of 41 recipients nationally of the prestigious New Innovator Award from the National Institutes of Health.

Frost’s $2.3 million grant will allow him to study what’s been a rather elusive subject for scientists: How cells make, move, and shape their membranes.

“In concert with advances in electron optics and detectors, my laboratory is overcoming the genetic, biochemical and computational challenges responsible for the almost total lack of structural models for membrane-bound complexes,” says Frost, describing his research. “The study is the first, critical step in our long-term goal of determining how these mechanisms are corrupted by disease or hijacked by pathogens. This knowledge will provide a new foundation for the development of effective and tolerable therapies for the diversity of age-associated and infectious diseases caused by defective or co-opted membrane-associated machines.”

“We know very little about the factors or the mechanisms by which cells regulate, reshape or sometimes break those membranes for different processes,” Frost adds. “For example, we’re working very hard on the mechanism of cell division. How does one cell become two independent cells? How do two daughter cells separate without any leaking or loss of integrity — we’ve made a lot of progress on understanding how that process occurs normally, as well as ways in which it can go awry in disease.”

Frost’s award from the NIH is part of a broader group of awards announced by the organization on Sept. 30, when the agency revealed the 2013 recipients of its High Risk-High Reward Research Awards.

Seventy-eight grants, including the one given to Frost, were awarded to scientists proposing highly innovative approaches to major contemporary challenges in biomedical research. The grants are supported by the National Institutes of Health Common Fund.

"NIH is excited to continue support of visionary investigators, among all career stages, pursuing science with the potential to transform scientific fields and accelerate the translation of scientific research into improved health, through the Common Fund’s High Risk-High Reward Research Program. This Program allows researchers to propose highly creative research projects across a broad range of biomedical research areas, that involve inherent risk, but have the potential for high-rewards," says NIH Director Francis S. Collins, MD, and PhD.

The New Innovator Award given to Frost is an initiative established in 2007. It supports investigators who are within 10 years of their terminal degree or clinical residency, but who have not yet received a Research Project Grant (R01) or equivalent NIH grant, to conduct exceptionally innovative research, according to the NIH.

Award recipients will attend the 2013 High Risk-High Reward Research Symposium in Maryland from Nov.18 to 21, where they will exchange ideas with other scientists through presentations, poster sessions, and networking opportunities.

For Frost’s colleagues at the University of Utah, seeing one of their peers honored is rewarding.

"Adam has an amazing breadth of scientific expertise – ranging from yeast genetics to electron microscopy – and he complements those skills with a wonderful mix of intuition and charisma,” says Wes Sundquist, PhD, a professor of biochemistry at the University of Utah who works closely with Frost.

Frost, on the other hand, shrugs off compliments and notes that he wouldn’t be able to do the work he does without being surrounded by talented colleagues who enjoy sharing ideas and synergizing their strengths and resources.

When considering where to build his research career, Frost says the University of Utah stood out as a place that welcomed collaboration — sometimes a rarity in ultra-competitive research.

“This is an amazing department,” says Frost of the University of Utah’s Department of Biochemistry. “The labs here are impressive, groundbreaking labs. This is a high-impact and exciting place. Most of the successful labs at the institutions where I was a trainee are large and autonomous, 'empires unto themselves', but here, collaboration isn’t frowned upon. It’s encouraged. And I’ve found that to be a breath of fresh air.”

Moving forward, Frost is hopeful that the award from the NIH will help his lab unveil new breakthroughs over the next five years.

“At the most basic level, we really want to understand how cells work. The focus of my lab has traditionally has been a very challenging area to investigate because cellular membranes are difficult to work with in the laboratory and the proteins that bind to membranes or penetrate into membranes are also challenging to work with biochemically. They are even more challenging to work with structurally -- to actually see these processes happening in molecular detail — that’s where my lab places a lot of emphasis, the structural side of the investigation,” says Frost.

“Our hope is that new, fundamental understanding of these processes will give us insight into infectious pathogens as well as into cell-autonomous processes like the cell cycle, and suggest new ways that errors or corruptions of these events can be targeted therapeutically.”

To learn more, read the NIH news release about the awards here.