A Choice Between Life and Limb 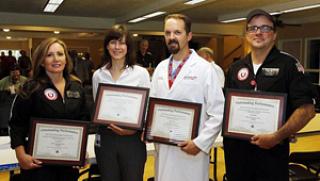 It was like something out of a movie or television script—doctors flown by helicopter to the scene of a gruesome train accident with a teen trapped under a boxcar. But this story didn’t come from primetime. Medical personnel from University of Utah Hospital were called to that very scene and, after an on-site amputation, saved the life of a young man. Nearly a year later the surgeon who performed the amputation is sharing what he remembers from that day.

“As an intern-resident, the first surgical procedure I ever did was the exact surgical procedure I did that day at the rail yard,” said Toby Enniss, MD, a trauma surgeon at University Hospital. He didn’t know it then, but his first surgery as an intern was preparing him for that unpredictable day years later. “They don’t train you for something like this in medical school.”

On the afternoon of August 30, 2012 University Hospital’s AirMed team was dispatched to a rail yard in South Salt Lake City where a 19-year-old was trapped under a boxcar. As the flight team arrived to the scene, the medical staff in the emergency department at University Hospital prepared to receive and treat a gravely injured teenager. With every minute that passed, emergency personnel at the rail yard and at the hospital learned more about the severity of the injury and the extent of the entrapment.

“As time passed the patient became less stable,” said Ennis. “The AirMed team knew it was a choice between life or limb.”

Enniss had to ensure all his bases were covered at the hospital before he could take the flight to South Salt Lake.

“I needed to get the green light,” he said. “I had to activate a backup trauma surgeon before I could take off to the rail yard. It was pretty impressive how it all came together.”

Within minutes, Enniss was en-route to perform an on-scene amputation.

“On the flight there I made a mental checklist of what we would need to do,” he said. “Even with preparation I had butterflies about what we would find, what we would see. I had to emotionally prepare for what we would be doing – which was the most difficult part.”

When he arrived at the scene, Enniss said what they found was phenomenal.

“Everything was so coordinated,” he said. “They made it easy to perform the amputation.”

The emergency crews had limited space to work with. Enniss remembers being squeezed into the small space between the boxcar and the train tracks with an AirMed nurse.

“The patient was wedged at the end of a boxcar,” he said. “Luckily one of the AirMed nurses had operating room experience. She helped me get the surgical instruments I needed.”

90 seconds later the amputation was complete.

After the amputation, the team of nurses and Enniss flew back to the hospital where the emergency department along with doctors from cardiology and orthopedics waited for their arrival. The patient was successfully treated and is continuing his recovery at home. But it was a lesson of survival and preparation for doctors.

“After the fact, our team debriefed and decided we needed to make sure we are always prepared for the unexpected,” he said.

Enniss says the experience was humbling. “Usually we wait in the emergency room and the ambulance drops the patient off and we take it from there,” he said. “To be at the scene was sobering. The number of people who responded and took extreme measures to save one person’s life. The whole experience amazed me.”

Fast forward one year to an awards ceremony where the State of Utah and the Bureau of Emergency Medical Services honored the team of doctors, nurses and flight staff for their role in the rescue of the teenager. The team was honored with the 2012 Incident of the Year Award. Enniss says a large part of the credit should be given to the South Salt Lake emergency crews who were the first to respond to the accident.

“I’m surprised and honored they’ve chosen to recognize what we did that day,” he said. “What we did was the most dramatic part, but only a small part of what really happened that day can be attributed to us. We by no means were alone.”