Groundbreaking Brain Imaging Research May Change Treatment for Down Syndrome, Other Genetic Disorders 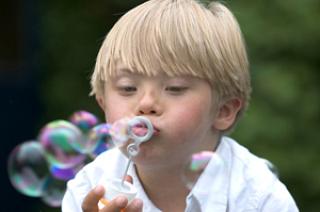 Skyler Nelson’s life is similar to his 13-year-old peers in some ways: He attends school in Salt Lake City, where he works on math, reading and other subjects every day. He enjoys time with his friends. He’s passionate about photography, a skill that once landed him on local newscasts as a hero, when he captured troublemakers vandalizing a neighbors’ property and was able to help police solve a case with his photos.

But Skyler’s development —and the way he’ll live his adult life —is also starkly different from many classmates. Skyler was born with Down syndrome, a chromosomal disorder caused by the presence of an extra copy of the smallest chromosome, number 21.

From the time Skyler entered the world, his family started their own life-long quest to keep up-to-date on the latest research and possible therapy options that would help Skyler to grow into an independent, high-functioning adult.

Results from groundbreaking research announced this month at the University of Utah may pave the way for changes in the course of treatment for Down syndrome and other genetic disorders — information that is giving people like Skyler a newly imagined future.

For two years, neuroscientists at the University of Utah studied the brains of 15 people with Down syndrome and compared their brain images with the brains of 15 “healthy” control individuals. They discovered remarkable differences in the brain images of people with Down syndrome –information that could change the way the disorder is treated in the future, said Julie R. Korenberg, MD, PhD, principal investigator for the Down syndrome study and director of the University of Utah’s USTAR Center for Integrated Neurosciences and Human Behavior.

“It opens up a whole new world of possibilities for accelerating therapeutics with Down syndrome and for other developmental disorders, ” Korenberg said of the study. “Up until now, there was no functional imaging of Down syndrome and we knew we needed it. To have this team of people that are taking fundamental neuroscience and applying it to imaging —it is unprecedented.”

The research idea in itself was innovative, said Jeff Anderson, MD, PhD, first author of the study, which will this month be published in the online journal NeuroImage: Clinical.

“It turns out that Down syndrome, in spite of being an incredibly common disorder, has been almost completely ignored by the scientific community in terms of brain imaging,” said Anderson, part of the team of researchers who participated in the study.

“We set out to do a project where we recorded the brain function of people with Down syndrome. What we found were some pretty striking abnormalities. It looks like there is massive overconnectivity in the brains of individuals with Down syndrome These are larger differences by an order of magnitude than we’re seeing in autism or in other disorders. In addition, we’re also seeing that there are some places in the brain that are underconnected —areas that are far apart and are part of networks in the brain where regions in a healthy brain work together to perform tasks.”

In simpler terms, Anderson described the discoveries as creating a “wiring diagram” of the Down syndrome brain. The brain consists of cells, most of which are on the brain’s surface and are wired together in different ways like a circuit, he said. Areas on the surface of the brain are where all the action is and most of the middle of the brain is where all the wires between the cells exist. What researchers have developed with brain imaging allows them to measure quantitatively how strong “wiring” is between any two points in the brain, he said.

As a practical matter, researchers for the first time will have a way to measure how and if a certain type of therapy is having positive results for a Down syndrome patient.

“One of the troubles in getting therapies to work in a disorder like Down syndrome is we don’t have a good way of testing to see if they’re working. If you can measure quantitatively what is abnormal in the brain of someone with Down syndrome, if you have a medication you think might work, you can give them a medication and after a short period of time you can, using brain imaging, see if it’s changing the abnormality,” Anderson said.

“Like a lot of problems in science, the real problem is just getting something you can measure. It’s like taking a thread from a tapestry that you can hold onto and pull. Once you have the foothold, you can keep pulling and pulling and the whole picture has unraveled and you can understand what’s going on.”

The new study, formally titled “Abnormal Brain Synchrony in Down syndrome,” is part of a larger study taking place at the University of Utah. The broader study, “Down syndrome: Genes, Brain and Behavior,” is now in its second year and funded by the National Institute of Child Health and Developmental Disabilities.

Korenberg, who arrived at the University of Utah in 2008 as a USTAR professor, oversaw the study, which is part of a larger mission that she leads at the Brain Institute to research the molecular genetics of mental retardation.

In the new study on Down syndrome brain imaging, researchers also compared Down syndrome patients with brain images from those diagnosed with autism and other genetic disorders. The research will clear the way for further study into the brain and genetics.

“What we can now say is that those genes on chromosome 21 alter the development and function of the brain in particular ways,” Korenberg said. “We’re beginning to not just sort through, but to unravel the mysteries of how the brain develops and how the brain functions and what the genetic basis of that function is. And that’s very exciting.”

The research gives hope to families like the Nelsons, who see the breakthrough as a new opportunity for therapies that could enhance Skyler’s quality of life in the future.

“The exciting thing is the possibility of him being able to learn at a greater rate and to be able to learn and comprehend things that he wouldn’t get because he has Down syndrome,” said Nancy Nelson, Skyler’s mother.

“As a parent in general, you’re always excited when your child learns new things and meets new benchmarks. The thought of that occurring more frequently and to a greater depth as a parent is just so exciting and so thrilling that this could actually occur.”

No cure exists for Down syndrome, but new therapies are constantly emerging to help people with the disorder develop to a higher-functioning level.

In addition to having cognitive delays, people with Down syndrome are at increased risk for health conditions such as congenital heart defects and respiratory, hearing and thyroid problems.

Korenberg said the new research breakthroughs are only the beginning of finding new knowledge about how brain wiring behind genetic disorders providers keys to treating and understanding autism intellectual disabilities and even Alzheimer’s disease.