Hilary Coon, PhD, research professor in Psychiatry at University of Utah Health, and her team are collaborating with Janssen Research & Development, LLC (“Janssen”) and the Utah Department of Health to search for genetic clues within large extended families that have unusually high rates of suicide. Identifying genetic risk factors for suicide could help medical practitioners predict who is at risk and inform new strategies to prevent the worst from happening.

Although suicidal behavior runs in some families, the genetics behind this tragic trait has not been widely studied. One of the major challenges has been separating causes of suicide from causes of mental illness. Mental illness and 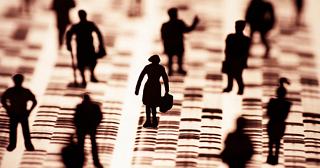 suicide are often intertwined but it is believed that these are separate conditions since most people with psychiatric disorders do not die by their own hands.

Together with her collaborators, Coon is cross-referencing a collection of DNA samples from people who have committed suicide with extensive medical and geographic information found in the Utah Population Database (UPDB). The team is jointly mining the genetic and phenotypic data to pinpoint genetic markers.

Recognizing that suicide is a sensitive subject, the Utah Department of Health Office of the Medical Examiner and the University of Utah are implementing numerous measures to protect the identities of people who have committed suicide and their living relatives. Data sets are cleared of names, dates of birth, and other individual identifiers.

This collaboration joins the University’s discovery pipeline with Janssen’s proven ability to translate discoveries into treatments.