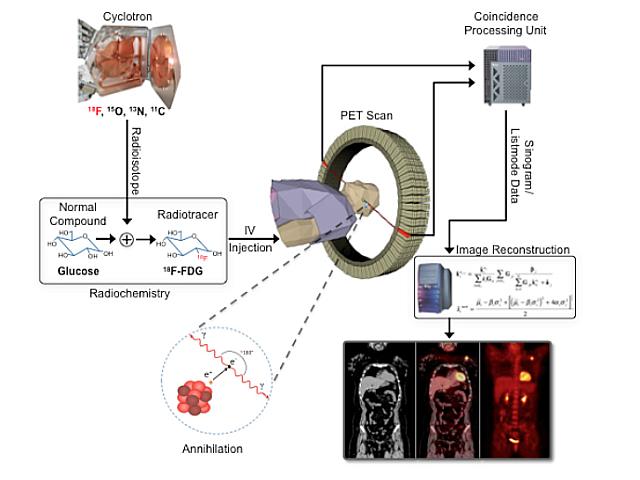 Positron Emission Tomography (PET) provides information about the body’s chemistry not available through any other imaging procedure. Unlike CT or MRI, which look primarily at anatomy, PET shows metabolic activity or function and physiology. PET has been used primarily in cardiology, neurology, and oncology. In particular, it has been used to assess the benefits of coronary artery bypass surgery versus heart transplant, identify causes of childhood seizures, localization of seizure focus, determine adult dementia type, and detect and distinguish between benign and malignant tumors.

In PET, the patient receives a short half-lived radiopharmaceutical (produced by a cyclotron). The most widely used radiopharmaceutical is 2-[fluorine-18]–fluoro-2-deoxy-D-glucose (FDG). Because FDG is short-lived, the amount of radiation exposure to the patient is about the same as that from several chest x-rays. Similar in structure to glucose, FDG is the most widely used compound in PET due to the ubiquitous use of glucose by the human body.

FDG is a positron-emitting compound that has been synthesized to study various physiological processes. As the positrons encounter electrons within the body, gamma rays are produced. A PET scan patient lies on a table that slides into the middle of the donut-shaped scanner. Within the scanner are rings of detectors containing special crystals that produce light when struck by a gamma ray. The scanner’s electronics record these detected gamma rays and map an image of the area where the radiopharmaceutical has localized.

Since the radiopharmaceutical contains a chemical commonly used by the body, glucose (or sugar, which the body uses to produce energy), PET enables the physician to see the location of a metabolic process. For example, glucose combined with a radioisotope will show where glucose is being used in the brain, the heart muscle, or a growing tumor.

FDG-PET is most commonly used in oncology to detect and evaluate tumors. All cells consume glucose to produce energy, and since cancer cells use more energy than neighboring cells, cancerous tissue appears “hot” or unusually active. FDG is also very useful in cardiology to assess myocardial viability and in the brain to diagnose a number of neurological conditions.